A short experimental video made to go along with a poetry piece by Bozidar Trkulja dealing with the passage of time.

The piece deals with itself, its very inception, which came out from discussion. A lot of ancillary contemplation and emotion which revolved around an immaterial core – the idea.

"The more it’s an idea the less it’s a form. (...) This explains a new kind of anxiety in the creative process. It seems like every new work defeats itself. (...) it all revolves around an essence which crystallized itself at some point and translated itself into an artifact or something. This cannot happen until it has been decided that it's happened."

Recorded in the tourist season in the Croatian hotel on the Adriatic coast. Elevator transport was interrupted, while the camera filmed the people and situations in the elevator at the time.

Humorous or awkward situation occur when dealing with the unexpected or unfamiliar but previously encountered. Uncomfortable moments are distributed within the group and thus become bearable, while exposed individuals inside the elevator achieve almost portrait-like quality.

The piece aims to expose the precarious situation of a young artist by playing the game of Jenga as if handling biologically hazardous substance. By rules, intervention creates increasingly unstable and complex structure.

Insight into the situation, dealing with it, makes the structure all the more loose, until the moment when it crashes. Each cycle takes something: something is lost, although remaining elements are the same.

English title: Space is a tactic I

This installation was made by an art collective PIT (Prostor je taktika). It is concerned with the history of the exhibition space and connecting it to the present state. Sound and video piece reference the texts and interviews that describe the atmosphere and function of the old factory, that was in this space before its present function. 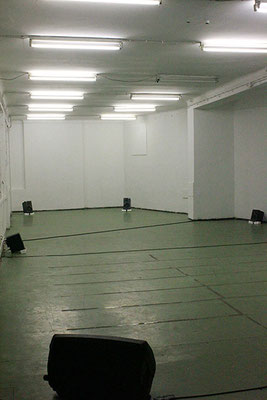 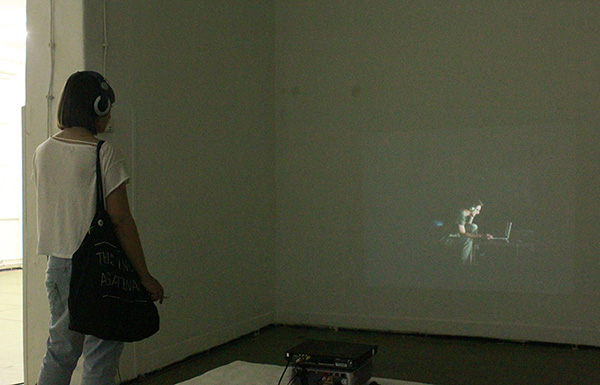 Made by an art group filtrKOMBINAT.

Bureaucracy acts as a complex network of interfaces between the information and the one requesting it. Energy and financially wasteful, it also helps filter the responsibility.

The piece highlights the relationship between the articles of bureaucracy and their performative inability, resulting from its own confusion over its role in the communication chain.

Identity is a construct. The almost infinite states of the Rubik cubes were deconstructed into the finite colour codes ordered by the participants, leaving the empty cubes available for play.

Accompanied by participants describing the process of trying to solve the Rubik cube problem they created.

Art group filtrKOMBINAT made this installation as a reaction to the theme of evolution. Luck and happiness are homonyms in the Slovenian language. The four-leaf clover is used as a symbol of rarity and random evolutionary genetic mutation, connected with the chaotic structure of possibilities offered by the technology for one to create his/her own luck or happiness.

Made by art group filtrKombinat, Object NOB (acronym for New Forms of Struggle) is the artefact of contemporary art, created from the foundation of modern predecessors, in this case represented by Monument of National Liberation Movement (Slavko Tihec, 1975).

The contemporary art usually develops its full potential only when the audience is actively involved and participates with their own interpretations and constructive criticism in the co-creation of the work. Unfortunately, the "new" art is often regarded as inferior to the "old" art in the eyes of the public. This piece was also created as a reaction, after the original idea was accepted and later rejected.

Art group filtrKOMBINAT made this installation as a response to the theme of interaction between the urban and the nature.

Original title is the word play on leprosy, connecting the fungus with the contemporary urban architecture, embodied in the fast-growing shopping centres.